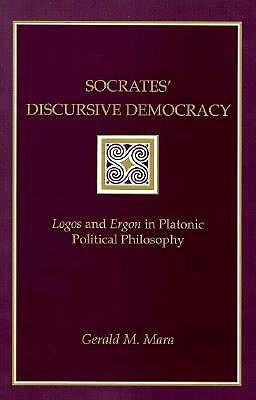 By showing how Socrates logos (the insistence that we go beyond ordinary sense for the rational solution of political problems) is tempered by if not opposed to his ergon (the particular behavior within practical discursive contexts) and insisting that Plato is both a metaphysician and an ironist, Mara enriches our understanding of various dialogues and the central subjects of Platonic philosophy and scholarship.

On this basis he goes on to argue, persuasively I think, that Athenian democracy provided context and referent point for Platos project even when that project included sharp warnings about democracy. The Plato that emerges provides the grounds for Maras notion of a discursive democracy. Mara does all this while entering into a respectful but critical engagement with an impressive range of contemporary political theorists and philosophers. -- J. Peter Euben, University of California, Santa CruzWhat makes this book so good is the way Mara brings his understanding of Plato to bear on contemporary theory.

He juxtaposes Platos position, as he understands it, with those of contemporary theorists such as Rorty, Habermas, Barber, Sandel, Rawls, and MacIntyre. Particularly intriguing is his discussion of the philosophic significance of the differences between Derridas treatment of Plato and his own.