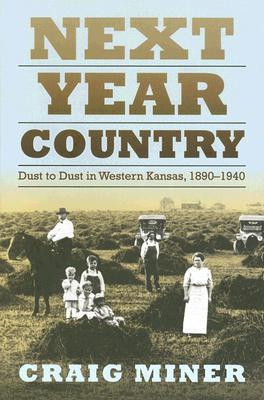 Before 1940, it was still distinctly rural-a place that some residents called the Edge of the World.Several generations of the Miner family have lived and farmed in Ness County, providing Craig Miner with a rich and very personal backdrop for this heartfelt and compelling portrait of western Kansas. In Next Year Country he recounts the resilience of his fellow Kansans through two depressions and the Dust Bowl, showing how the region changed dramatically over fifty years-not for the better, some might say.In this striking regional history, Miner blends the voices of real people with writings of small-town journalists to show life as it was really lived from 1890 to 1940.

He has fashioned a richly textured look at determined individuals as they confronted the vagaries of raw Nature and learned to adapt to the machine age. And he captures the drama and vitality of rural and small-town life at a time when children could die in a blizzard on their way home from school, in a place where gaping holes of cellars and wells from abandoned homesteads posed real hazards to nighttime travelers.No mere nostalgic reverie, Miners book chronicles the hard challenges to these Kansans ambitious efforts to create a regional economy and society based on wheat, in an area once thought only marginally suitable for cereal crops.

His diverse topics include the history of agricultural experiment stations, new approaches to irrigation, and the impact of the tractor and the combine- the role of womens clubs in developing culture, the growth of higher education, and the rise of the secession movement- and how people responded to pests, from prairie dogs to grasshoppers, and to radical groups, from the IWW to the KKK.Next Year Country depicts the kind of rugged individualism that is often touted in America but seldom seen anymore, a testament to how people dealt with both Nature and transformative change.

It is both a love song to Kansas and the best kind of regional history, showing that life has to be taken on its own terms to understand how people really lived.