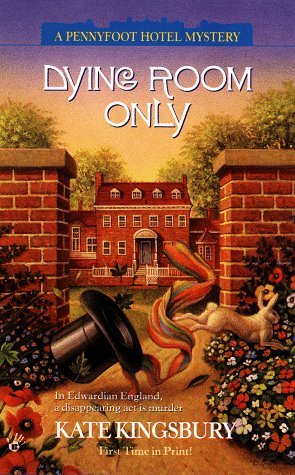 This is the 11th book in the Pennyfoot Hotel series, following Death With Reservations. The story picks up about four months after the conclusion of the 10th book beginning with a magician’s performance at the hotel that goes lethally wrong.This particular novel is written with the same period style and expertise as all of Kate Kingsbury’s previous novels in the series. But there are several subtle differences.First, the book starts off from Phoebe’s point of view while viewing the magician’s performance that she has arranged for the hotel. Cecily and Baxter, our main protagonists, are barely mentioned or even seen for the first few chapters.Secondly, there are more sections devoted to the observations of Phoebe and Fortescue than have been written in previous novels of the series.

For what seems like the first time, we get first person POV from both of these characters. In fact, the sections where we hear what Fortescue is thinking are absolutely amazing – not to mention, hilarious.Thirdly, there is a more somber tone to the book. Cecily is far more subdued regarding the cultural changes of the era, circa 1910. And this time she truly realizes that not telling Baxter where she is going or why is not the correct thing. It doesn’t stop her but she does not pursue the steps of the investigation with such a blithe sense of independence as in previous novels.And finally, this story was originally intended as the penultimate novel for the series.

Thus the reader can sense that plot threads that have carried through previous novels are being tied up.Because this novel is, at this time, 15 years old and out of print, it is not readily available at libraries nor is it inexpensively available at bookstores, used or otherwise. It has just this month become available as an e-book- therefore, I had to read it out of order.

Now that I have read the book, the events that take place in the next novel, Maid to Murder, make so much more sense and feel less contrived.Therefore, the old reader’s caveat remains intact: try never to read, out of order, a book that is part of a series.